My second night in California my friends suggested taking a tour into San Francisco. Take some time to do some minor touring and hitting some culinary and wine hot spots they had stumbled across. Of course this sounded like a fantastic idea to me and I jumped all over it! On the CalTrain (train system that travels around the Bay of San Fran connecting the outer cities and regions of the Bay) and Bart (subway system injecting the neighbourhoods of San Fran) we went to get from San Carlos to Powell station in San Francisco. 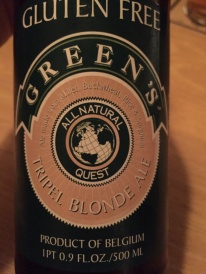 Once here we met up with another friend of theirs staying in the area for the weekend. The spot to hit first Mikkeller Bar. This is a pub that specializes in poring craft beer and also produces a number of beers as well. Lucky for me there was this fantastic gluten free beer from Belgium available (Green’s Tripel Blonde Ale). Something that offered notes of candied apple and apricot and peach. It was hoppy but very approachable and smooth, one of the best gluten free beers I have tried! This was paired perfectly with the pub fair offered in house, of which I ordered the “Texas Ranger Sausage” which comes with onions, jalapeños and green peppers and a chipotle ranch sauce – delish! END_OF_DOCUMENT_TOKEN_TO_BE_REPLACED